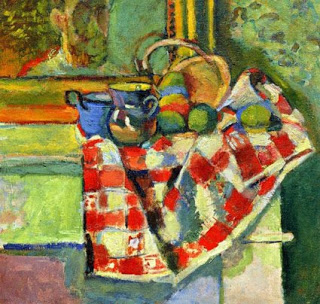 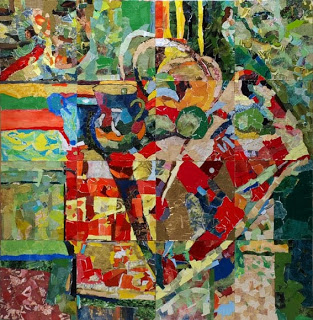 Over 3 sessions in March the Devizes group took on making a collage of a well known Matisse painting… only they didn’t know what it looked like until after they had finished!!!

An image of the painting “Still life with Checked Tablecloth” painted in 1903 by Henri Matisse, was traced onto cardboard and then divided into 16 rather abstract looking squares. It was impossible to indentify very much and even to know which way round a square should be.

Patiently and with much amusement the members collaged with scrap paper, the square puzzle-pieces using a small photo of “their piece” for colour reference and guidance. On the last meeting before Easter we brought all the pieces together and…voila! as they say in France, our masterpeice was revealed. We were all a bit stunned by the final artwork – which measures a metre square – and spent a lot of time looking at it and congratulating each other before lunch – which always over-shadows any artistic endeavours!!

We are obviously very proud and pleased with our achievement and have plans to show it to the rest of Devizes over the coming weeks. Watch for more news on this.

Thanks to the group members and volunteers for being such good sports and getting stuck-in. And I am pleased that nobody said “Why are we doing this?”

PS Pictures of our artwork and Matisse’s original effort. Guess which is which.