Screenprint Project at Pewsey and Marlborough 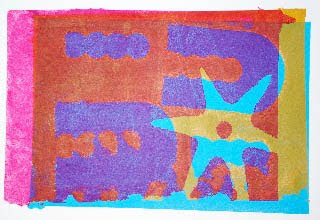 “I’m covered in paint, but I really enjoyed that”
Marlborough Group member

Between September and December 2010, Sarah – who usually is a volunteer helper at the Devizes Group – has been leading projects at Pewsey and Marlborough.

Screen-printing as a process is over 1000 years old and originates from China. It was developed in Europe as a commercial printing method during the 18th and 19th centuries, but became widely known as an art form during the 20th century. In the 1960’s Andy Warhol popularised the technique with his iconic images of Marilyn Monroe and Campbell’s Soup Cans.

So it was an ambitious adventure for the groups to attempt this printing method with limited resources, space and support. But like all Arts Together activities the challenge was taken on with enthusiasm and a desire to have fun. You can see the results for your self by following this link to the Marlborough webpages.

Our thanks must go to Sarah for all her hard work and effort in preparation, leading the sessions and lugging around a car-load of kit. Also special thanks to the group volunteers – and you know who you are – for spending long periods up to their elbows in freezing water, scrubbing the printing frames clean.

Sarah is currently studying for a Foundation Degree in Applied Art and Design.